From the Holler to the Hood

Taking on Dirty Coal -- From the Holler to the ‘Hood'
Chicago, IL, January 24, 2011--Larry Gibson an Appalachian Hero in the struggle against Mountain Top Removal coal mining will meet Tuesday morning with Chicago Alderman Joe Moore, the lead sponsor of the Chicago Clean Power Ordinance, to discuss the devastating health and environmental effects that reliance on coal as an energy source has brought to their two communities. The two will note how the entire life cycle of coal destroys lives and ruins the environment, from the rural mountain communities where it is extracted to the large urban cities where it is burned. 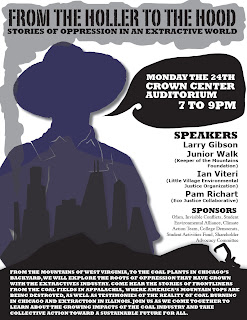 With the recent US EPA veto of the permit for Spruce Mine, the largest single mountaintop removal mine in West Virginia history, and the current push to pass the Clean Power Ordinance in Chicago, now is the time to begin moving forward to renewable energy and away from the fossil fuel industry.

“While there, I saw first hand the social and environmental devastation of mountaintop removal mining and realized that this was just the first step in the trail of devastation left by our reliance on coal.”

“What we are talking about isn't 'just' mountaintop removal strip mining, it's the annihilation of entire mountains for cheap energy”, said Larry Gibson of the Keeper of the Mountains Foundation."

Gibson was born on Kayford Mountain in West Virginia and moved to Cleveland with his family as a child. After retiring from General Motors on disability in the early 1980s, he returned to West Virginia and his mountain. At the time, he discovered the family's 500 acres had shrunk to 50 acres. The coal company had acquired the rest.

“The mountains in West Virginia are my home, and I’m doing everything I can to protect them”, said Gibson. “I tell people who come to see me ... I am not a tourist attraction. Don’t come here unless you are ready to do something.”

When Alderman Moore returned from Appalachia, he responded to Gibson’s challenge to take action.

“In Chicago, we have two old coal plants that not only are causing respiratory problems and premature deaths, but also are the largest stationary sources of global warming pollution,” said Moore. “I have introduced an ordinance in the Chicago City Council that calls for the clean-up of these plants”.

A few weeks ago, the US EPA revoked the Spruce Mine permit which stopped what would have been the largest mountaintop removal operation in West Virginia. This action was historic as the 2,300-acre mountaintop removal mine previously had been permitted by the U.S. Army Corps of Engineers.

The Chicago City Council Committee on Health is scheduled to hold a hearing on February 14th on the Chicago Clean Power Ordinance.

“When this ordinance passes, it will be just as historic as the veto of Spruce Mine,” said Moore. “To date, no major metropolitan city in this country has passed an ordinance that regulates the harmful emissions coming from the stacks of its power plants”.

“This is why I’m here in Chicago”, said Gibson. “I want everyone to know that they are connected to mountaintop removal through dirty electricity and poisoned water. Coal is a global commodity. Whether Chicago gets coal from mountaintop removal or underground mining, the power plants here are driving the strip mining practice. I want everyone, just like this Chicago Aldermen, to do something to stop the destruction of our mountains and our communities. People in Appalachia are suffering from poisoned water just like people here in Chicago are suffering from polluted air.”
Posted by Larry Gibson