On The Road Again

On the Road Program

INVITE US TO YOUR COMMUNITY TODAY FOR A POWERFUL SPEAKING EVENT
﻿
The On The Road Again Program will educate others on the devastating effects of Mountaintop Removal Mining by telling our personal stories and experiences of living in and around the coalfields of West Virginia.  We believe that through our stories and experiences, people will become aware of what is happening to our mountains, streams, ecology, health, and heritage.  This awareness will lead to the action for change that is needed to move beyond a coal-based economy to one that values people, land, and mountain heritage.

Colleges and Universities - On behalf of the Keeper of the Mountains Foundation (KOTM), Larry Gibson travels to individual colleges and universities throughout the United States. Larry speak to students, teachers and administrators concerning the need for sustainable energy production and use, and in particular to describe the environmental degradation of mountaintop removal coal mining.

Public Seminars and Conferences - In addition to presentations at academic institutions, Larry has participated in public seminars and conferences on a wide range of environmental projects, with the view towards providing insights into the unique problems of environmental degradation that mountain destruction. Such seminars have included: The Coal Summit (Charleston, WV 2003), Catholic Diocese Conference on Environmental Justice (Charleston, WV 2004), National Unitarian Conference (Nashville, TN 2000). 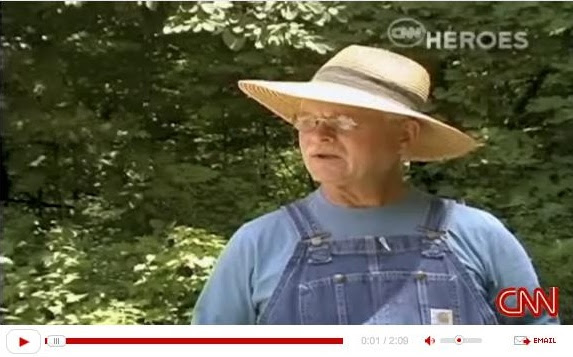 CNN Heroes debuted the story "Larry Gibson: Defending the Planet" on Tuesday, August 14th, 2007 during Anderson Cooper 360. It also aired Thurs 8/16 and Sun 8/19 all day ON CNN & CNN HEADLINE NEWS. (2 separate channels).
Larry was honored by CNN when he was named a CNN Hero. He has also been featured in National Geographic Magazine, O Magazine, Vanity Fair, New York Times, and several recently released documentary films including, Coal Country, Burning the Future, Mountain Mourning, and Mountaintop Removal. A recently released book, Bringing Down the Mountain, tells us even more of Larry's important role in this fight.

He works tirelessly to raise awareness about the destruction in Appalachia and to light a fire in our bellies to stop mountaintop removal. Larry continues to speak at countless universities and conferences, and he has hosted thousands of people to see Kayford Mountain over the past 20 years.